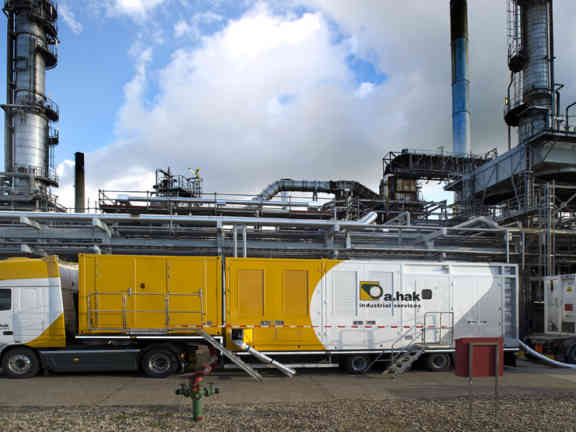 For planned and unplanned catalyst activities and when inert entry to your reactor is required, we offer flexible, cost-effective solutions that are safe and fast. We guarantee a controlled minimal cooldown time in order to maximize efficiency. It is as fast as LN2cool.

We know your space

Carrying out catalyst changes and allowing inert entry in reactors such as reformers, hydrotreaters and hydrocrackers can be time consuming due to limitations in the process installations. Intero Integrity Services has flexible resources and the expertise to offer semi-automatically controlled reactor cooldown methods that are adaptable to the configuration of your reactor.

Our work begins well before the shutdown of your reactor. Using a unique licensed software model, our specialist outlines a detailed plan for the cooldown. This includes an estimate of the cooldown time required for achieving your desired reactor temperature. Intero Integrity Services is the only company worldwide allowed to use this software. After normal cooldown procedure with hydrogen, the process will be stopped, usually at around 120°C. One of our three cooling techniques can then be applied to accelerate the cooldown until the optimal temperature is achieved.

The Ln2Cool method is the fastest and most efficient cooldown option. Cooling is achieved through the controlled injection of liquid nitrogen droplets into the recycle gas circuit stream, instantly creating a very cold gaseous nitrogen. This way, cooldown time is reduced by lowering the temperature of the recycle gas going into the reactor. Our control system ensures safety by regulating the flow of nitrogen through the sparger. The sparger is a specially designed injection tool which avoids cold spots and maintains the optimum cooling rate. Automatic continuous temperature monitoring controls and protects the injection point and reactor from excess cooling. Shutdown is activated automatically if the temperature drops below the preset limit.

Not every system is suitable for the Ln2Cool process. As an alternative, we provide the option to cool down the reactor by using very cold nitrogen gas. This nitrogen gas is vaporized by our own units before injection into the recycle gas stream.

If there is no recycle compressor available or the system has other restrictions the final method we offer is gaseous nitrogen injection at +5°C. The nitrogen is pumped once through the reactor by an external vaporizer unit to the flare. Based on the lowest temperature difference, once through method is still faster than a conventional cooldown.

Prior to cooldown or for reactor regeneration purposes, hot stripping is required for the removal of hydrocarbons. Intero Integrity Services’ specialized equipment fleet can provide pump units with the capability to inject warm nitrogen with temperatures up to +350°C. The hot nitrogen will be pumped through the system, dissolving the hydrocarbons and carrying them out in the hot nitrogen flow.

We cooled them down

For a complete refinery decommissioning project Intero Integrity Services was requested to strip the hydrocarbons of the reactor beds and cool the twenty-four reactors to ambient temperatures.

Due to our extensive experience in reactor cooldown and our advanced equipment, we were asked to provide an estimate time for stripping and cooling the reactors in the most efficient way possible. Since the recycle compressors were offline and could not be used, Ln2Cool or Cooldown were not an option. The small and large reactors were positioned at different locations, such as dewaxing, HDS, CCR, etc. After applying our hot stripping service to all reactors, we cooled them down by the once through method. Most reactors could be cooled in series or in parallel, however due to large distances between, some were cooled one at a time.

The entire operation, including heating, stripping, cooling and rigging, was completed in only 26 days using 2 million kilograms of nitrogen.